i came across one issue and not sure what to do next.

I have set up SP plugin in ableton session - all audio tracks. When I record in one session (tracks) different kits (presets) and then I wanna hear it back it always plays the kit which is currently selected in plugin, although it was recorded trough audio signals on different kit …

is there anyone with similar experience/trouble?

If you are using the template (available on this page of the manual), then it’s just a matter of muting the Sensory Percussion Plugin channel, and unmuting the recorded tracks. 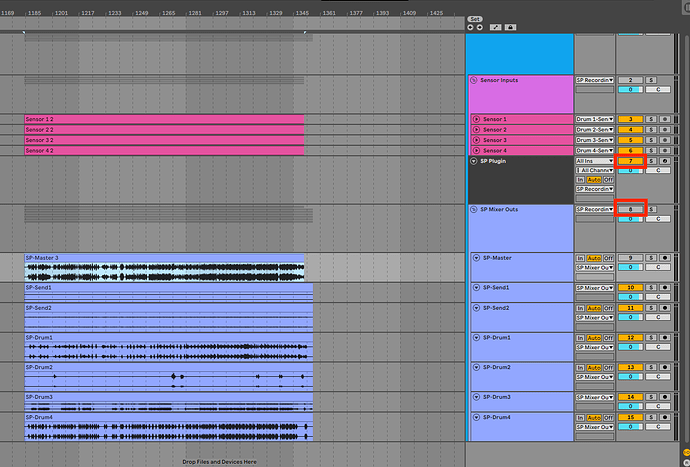 In the above screenshot: the Sensory Percussion plugin is on and the recorded tracks are off (the pink sensor channels are the audio signal from the sensors themselves, and are routed directly to the plugin, so they are not played through your speakers). So if I were to press play now, it would play whichever kit I have selected in the plugin. 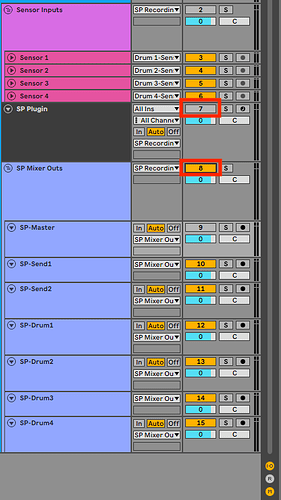 And so now if I were to press play: the recorded audio channels in the SP Mixer Outs group would play, and the kit I have selected in Sensory Percussion would be muted.

The workflow in the first screenshot allows for you to tweak samplers and FX in the software or even swap kits after you’ve recorded a take (and even loop a performance and make changes to the kit in real time, as described in this article)

After you’ve made all the changes to the kit that you want, you can then arm just the SP-Mixer Out channels and record the output of the edited performance. At that point you can permanently mute the Sensory Percussion plugin and apply Ableton effects to the recorded output channels.

Hope this was helpful.